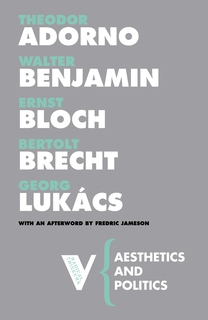 Presentation I: Bloch Against Lukács

“The pivotal issue of the exchange – the relationship between Expressionist art and social reality – is not easily arbitrated. [Ernst] Bloch’s defense of Expressionism avoided direct confrontation with the aesthetic premisses of [Georg] Lukács’s attack. Circumventing his opponent’s assumption that the proper function of art was to portray objective reality, in organic and concrete works from which all heterogeneous material, and especially conceptual statement, was excluded, Bloch chose instead to insist on the historical authenticity of the experience that underlay Expressionism. It was thus left open to Lukács simply to remind him that the subjective impression of fragmentation was theoretically groundless, and to conclude that Expressionism, as an art that typically misrepresentated the real nature of the social whole, was invalid. The effect of Bloch’s démarche was to distract Lukács’s attention, and his own, from one of the most crucial issues in the exchange between them. Driven by the ‘impressionistic’ character of Bloch’s defence to emphasize the unity of the social whole, Lukács failed to register its essential point: that this unity was irreducibly contradictory. In this way, an opportunity to debate the problems of the artistic presentation of contradiction – the absent context of Bloch’s remarks on montage, and a stubborn crux in Lukács’s realist aesthetics – was missed.”

First essay in this compilation is an essay by Bloch (1932, subsequently re-published with slight modifications in 1962), translated by Rodney Livingstone.

Close to the heart of this argument between Bloch and Lukács seem to be deliberations about populism in art. At worse, did the idealism and/or emphatic subjectivism of Expressionism facilitate the solvency of Fascism in the era in which this debate occurred? With a less sinister edge, was its emotionalism bourgeois, and thus responsible for perpetuating art forms which are increasingly irrelevant to broader culture?

Tracing historical contention around the significance of Expressionism, Bloch references figures unfamiliar to me, which may be relevant to my own interest in aesthetics (for example, arguments about Antiquity and classical art – Ziegler, Winckelmann, on pages 25-26). An extrapolation of Bloch’s defense of Expressionism might be something of a broader defense against fundamentalism in aesthetics, refuting “Permanent Neo-classicism” and the censorship that is inevitably placed upon artistic experiments when they are given the mandate of carrying on the classical lineage of art as such (20). Questions about the role of art, and the need for propaganda, are raised here by Bloch (20-21). One particularly pithy, and sarcastic, passage: “The result [of such Neo-classicism] is that there can be no such thing as an avant-garde within late capitalist society; anticipatory movements in the superstructure are disqualified from possessing any truth. That is the logic of an approach which paints everything in black and white – one hardly likely to do justice to reality, indeed even to answer the needs of propaganda. What are the Marxist presumptions of this argument (perhaps regarding the role of the work of art towards a revolutionary movement) which are more and less meaningful to my own excavation of the role of art (and aesthetics) in the present?

See pages 25-27 for a brief foray into kitsch and historical debates about popular art. (Bloch defends Expressionism against allegations of elitism, citing folk art that served as inspirational.)